In the heart of Quebec

In the heart of
the action…

In the heart of
the history…

In the heart of
Quebec !

A LOT OF ACTIVITIES

To learn more about these events: 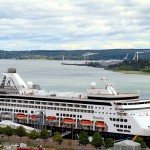 With you in the heart of discovery!

The Notre-Dame-de-Québec Basilica-Cathedral, located on the site of the first parish church, has been remodelled several times. The building we see here today dates back to 1925 and was erected from a previous one which had been almost completely destroyed in a fire (only the walls were left standing) shortly before. A lot of churches in Québec City bare the name Notre-Dame which means the Virgin Mary. As a matter of fact, if you take a look above the main entrance, you can see the letters AM which stand for Ave Maria. The interior of the cathedral is of great beauty. We can see a pew of exceptional beauty from 18th century artist François Baillargé; it had to be reconditioned after the 1922 fire. Since 1993, the funeral chapel of Monseigneur de Laval can be seen; we can see a bronze recumbent statue of the bishop. In the basement, is the crypt containing the remains of many other bishops such as Québec’s second bishop, Monseigneur de Saint-Vallier. Also found are the remains of Cardinal Taschereau, Governor Frontenac and several other important figures of our history.

City hall, built in 1895, held its first municipal session the year after. Today, mayor Régis Labeaume and the elected representatives have their seats. Its architecture is interesting and attractive. For example, as you may have noticed, on the gables, a pineapple, used as a sign of welcome. On the left, close to the entrance, a stone is engraved with letters JHS. The three letters that you see are JHS which stand for “Jesus Hominum Salvator” or “Jesus, Saviour of Mankind”. Back then, in 1647 to 1648, the Jesuits had their college built on this site and these three letters at the gate of the main entrance. The British Garrison used it as barracks from 1765 to 1871. A few years later, it was completely destroyed but this stone was kept as a reminder of the Jesuit’s work.

At one time, the City of Québec was the government headquarters and the main access to the French colony. Québec therefore had to defend its installations and to provide accommodations for its soldiers. In order to defend itself against the English, the French built a variety of fortifications and barracks. Just think of Old Québec’s fortification walls. Following the English Conquest, the British constructed the Citadelle and the Martello Towers. The Artillery Park depicts more than 250 years of French, English, and Canadian military history.

The Dauphine Redoubt, built from 1712 to 1750, housed French soldiers. They were about a hundred and lived 16 per room. Their room even served as a kitchen. The life of a soldier was quite difficult. Menus were not very varied and consisted of beans, bread and meat. Vegetables were scarce. In the 19th century, British soldiers lived there until they left in 1871.

At 150 meters (450 feet) by north, new barracks were constructed in 1749 when threat of the English was more persistent. French soldiers were housed in these barracks. This construction is over 175 meters (525 feet) long which made it the longest ever built in New France.

Rue Saint-Jean is Quebec City’s main street. This street was traced and surveyed (measured) by surveyor Jean Bourdon around the mid 1700s. Starting from 1800, along with Buade, Fabrique and Palais streets, it was considered a commercial street. In fact, tradesmen, merchant dealers and many innkeepers could be found. It was widened in 1871-1872. In fact, if you take a look at the first building by south, at the corner of St-Jean and D’auteuil, you see that the front of the building was cut. Today, rue St-Jean is still hustling and bustling with its many restaurants, boutiques, libraries and bars.

Since the end of the 17th century, the Saint-Jean gate has been destroyed, relocated, repaired, and rebuilt. After its 1897 destruction, in order to leave a free passageway for electric tramways, it was not reconstructed until its latest 1939 version. The gate’s architecture is of medieval style, like all the other gates in the city.

Place-D’Youville owes its name to the late Margerite D’Youville, founder of the Sisters of Charity. At the very beginning, this place was for the Montcalm Market. This covered market was inaugurated in 1877 but demolished in 1931 to make way for the current Palais Montcalm where we find a concert hall with incredible acoustics named The salle Raoul-Jobin concert hall. In front is located the artificial ice-skating rink opened from October through March. On north side, we find The Capitol Theatre dating back to 1903. At the beginning of the 1990s, it was renovated and now offers a hotel and an excellent Italian restaurant. Place-D’Youville is a very popular attraction where tourists and locals meet to attend events such as the Québec Winter Carnival, Festival d’été de Québec and other special events. 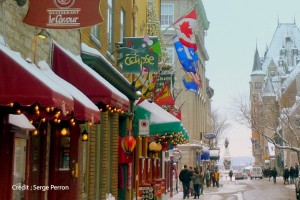 Québec Top Tours was pleased to guide journalists invited by the Quebec Tourism Office. They were delighted with their visit and promised to promote Quebec City to their readers.